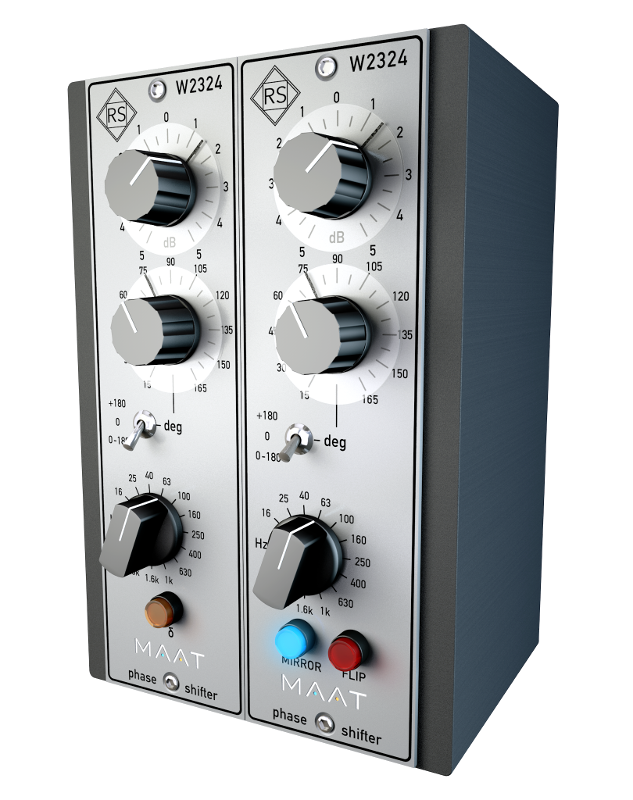 Creating a very high fidelity, phase shifted version of the input, RSPhaseShifter provides a fast, convenient and musical means of aligning individual mix elements for best subjective result. RSPhaseShifter is great for any situation where you need to creatively control tonality, power spectrum and harmonic content through phase manipulation. Post–production, stem mastering, outboard gear compensation, film re–recording, “live” production, sound reinforcement, along with content creation for gaming and VR all benefit from having RSPhaseShifter on hand.

RSPhaseShifter was created in conjunction with Roger Schult/German Audio Lab, and is a painstaking, 64 bit digital realization of Schult’s trusted Phase Shifter W2324 analog phase rotator hardware. When multiple sources compete rather than complement, RSPhaseShifter should be your choice for a fast, intuitive, easy to use and effective remedy.

RSPhaseShifter: a mixer’s secret weapon, both live and in the studio…Whether it’s mix sessions with multiple tracks of one instrument, or alignment of spots and overheads, RSPhaseShifter makes quick work of cancellation issues, bringing back the richness and impact you cannot get from basic delay compensation. Match and optimize the time delay or phase response of a subwoofer in a surround monitoring environment, address fold–down issues or create thick, ultra–wide sounds and phase sweeps by deliberately manipulating phase of one side of a stereo track.

RSPhaseShifter’s analog–style controls are no accident. They’re the same controls found on the tried and true Phase Shifter W2324 hardware, only better. With no added noise, double precision internal processing plus support for AAX and 8x sample rates, RSPhaseShifter is a cost effective addition to any engineer’s toolkit.

As with all Roger Schult by MAAT products, the RSPhaseShifter is hand crafted and precision engineered in California by way of Germany. This is an explicit digital recreation of the analog W2324 topology, not a modeling or simulation algorithm. We copied the functionality of the original hardware without analog’s shortcomings. This tool´s value is more about what it does technically, so we left out stuff like fake transformer color, hum or Johnson Noise. There are lots of colorful plug–ins, we simply provide convenient access to the useful functionality along with a classic API Lunchbox look.

This three position switch is used to select the range of the phase shifter.

The center Phase position, the “0” setting or Bypass mode, provides a means to compare the effect of the selected phase shift with the unprocessed, original phase of the source material.

The phase shift is dependent on the selected frequency setting. The Frequency control is either stepped for repeatability or continuous; your choice. Resonant frequency selection is managed by an 13 step ELMA–style control with the following frequencies:

Additional controls include a ±5 dB of gain refinement plus MIRROR, FLIP and δ (DELTA) modes for use during stereo operation.

For most applications, it makes sense to use RSPhaseShifter on just one channel, rather than on both stereo channels. A common example would be when a stereo pair of ambiance mics suffer from slightly different distances to a localized source. Additional uses include:

Get the most from RSPhaseShifter with these three use case videos…

“CONCLUSION With the release of RSPhaseShifter, MAAT showed that, in the market for audio plug-ins, there was one more strong player with which it’s impossible to ignore. The quality of their algorithms proved to be extremely high, the design and aesthetics of the instruments do not raise any questions, and the ideas embodied in the products look very complex and, with respect to the past, look far into the future. The cost of RSPhaseShifter is $99, which is quite reasonable given the functionality and possible range of applications.

“Excellent customer service and excellent plugins — it’s really nice to be dealing with a real human being! …for a long while now I’ve been intrigued by the various recording techniques used for classical/orchestra and choirs…I had (a) stereo pair at the rear of the hall and a four mic array halfway down; two cardioid and two omnis on the outsides. I got to musing about the phase difference between the two cardioids and the two omnis on the same bar. So I did some maths and worked out the wavelength between the mics that was most likely to be an issue and then used RSPhaseShifter to mess with just that frequency and it was like lifting a veil. The sound before was fine, but it was just that bit better with the plugin enabled.” See What’s Your Headache item #4 above…

“(I) purchased RSPhaseShifter right after I downloaded the trial version because I was so impressed with the results. I used it on a project…that had vocal added to electronic music and found the Delta feature to be such a quick way of determining what effects I was adding with RS PhaseShifter in the mirror mode. Really a great new useful tool for mastering to help enhance the dynamics of a recording. Looking forward to the next MAAT tool!”

“Congratulations…MAAT team with this excellent plugin! I've been working with RSPS and think it sounds incredible. For years I’ve wanted a phase tool like this which allowed a continuous range, yet sound natural. I found most of the available products had various limitations, or didn’t retain adequate transparency. It was most important to me primarily with acoustic sourced material such as acoustic guitars. I think I can finally achieve what I've been wanting with RSPS…”

“RSPhaseShifter is…very helpful and I don't know of any other audio plugin that could perform the same tasks.”

“Of all the plugins I’m using in my DAW, I can imagine no other plugin that is able to fix phase issues like (RSPhaseShifter).”

“(RSPhaseShifter) isn’t always needed, but when it is, it’s a lifesaver…couldn’t mix without it now :)”

A review by Dirk Wannemacher on BONEDO.de gave RSPhaseShifter four and a half stars out of five. We lost a half star for sticking to analog–style controls, just like the real thing! ;)

“SOUND
The MAAT plug–in is sonically neutral. I could not perceive color or change other than the intended settings. The important transients also pass…without damage. The plug–in sound is on a level with the hardware modules from Roger Schult’s workshop. Nothing is colored. The module does exactly what the name says.”

“CONCLUSION
The MAAT RSPhaseShifter can be used to correct phase errors. Through targeted use on individual tracks, the low end of a mix can be tidied up without pressure being lost, or the highs opened and broadened, (all) without sacrificing mono compatibility. Depending on the audio material and settings, the effect can be subtle to crass. The RSPhaseShifter can, in many cases, provide necessary icing on the cake, to make a good mix an excellent mix.”

— Here’s a couple of RSPhaseShifter reviews.

— In another thread, wagz asked:
“I was considering buying RSPhaseShifter. But, I already have MAutoAlign. Have you compared these two plugins, by any chance?”
Karloff70 said:
“Different thing. I also have MAutoAlign, but it hasn’t come in very useful after initial excitement. Comes up with a different guess each time you roll the dice. No dice involved in the RSPhaseShifter, just frequency specific, manually dialled in goodness.”
Robo said:
“Hi wagz, I haven’t used the MAutoAlign I’m afraid but I agree with everyone here, the RSPhaseShifter is one of those plugs that takes care of your audio, extremely transparent and you get out exactly what you put in (except for the phase changes of course!)”

Reviewers! Want to add your voiceover to the mix?

Head to our Contact page and give a shout…
We’d love to hear what you think about RSPS!

Looking for the latest version of your software? Just download and install the demo! The installer will update everything and your license will take over when you next use the product.